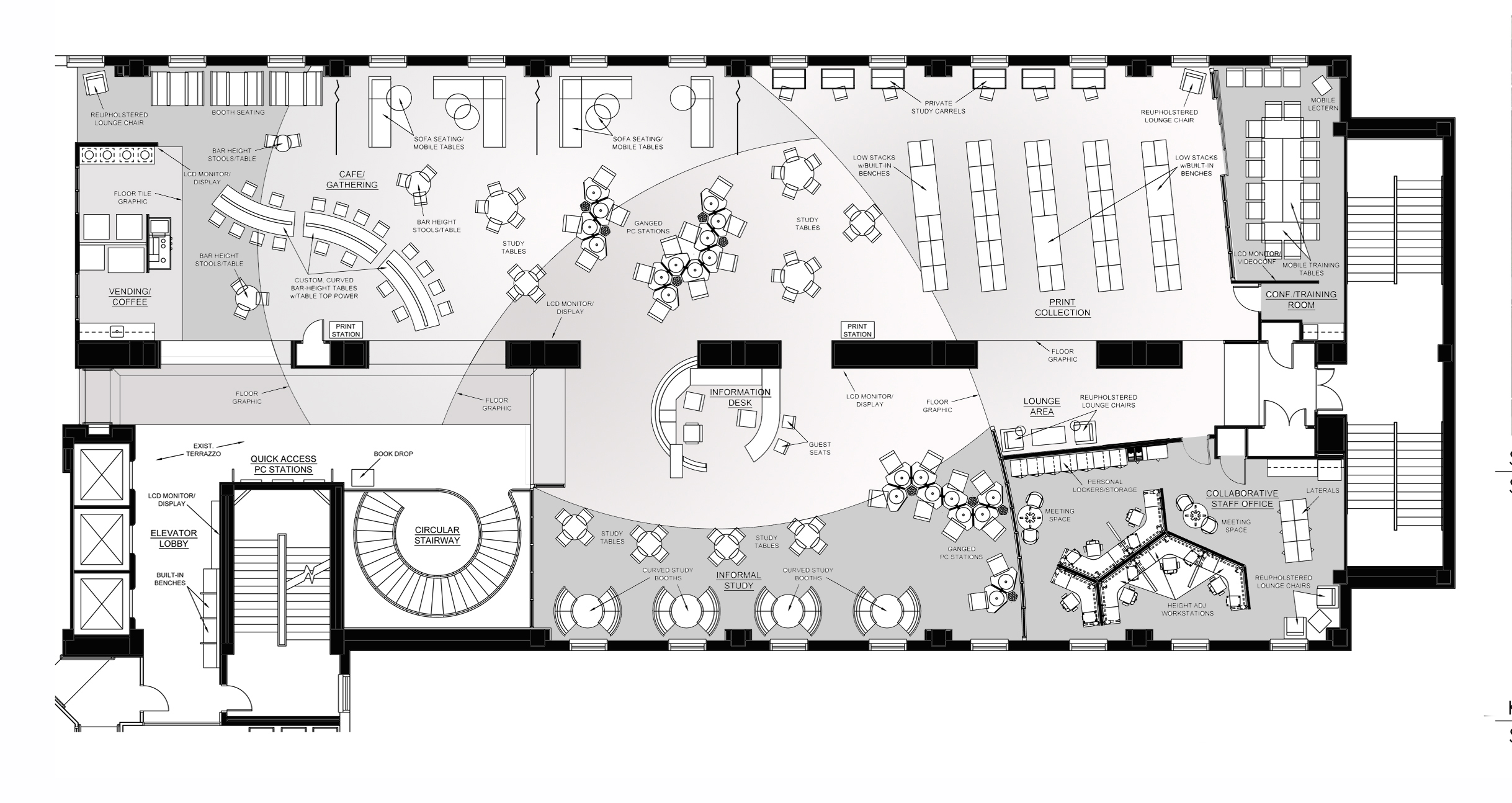 The Roland G. Parrish School of Management & Economics Library is a renovated library space at the second floor of a 1960s-era building.  An original floating grand spiral staircase winds up to the library entry from the first floor as the primary entrance.  The design challenge for the team was to transform the existing inwardly-focused, windowless and monotone reading room into a vibrant space that students would want to work and interact in.  A further challenge to the design team was to allow the new, flexible space to remain open 24/7, while securing various components of the library, such as the bookstacks, staff offices, and some circulation paths leading to other parts of the floor.

Input was solicited from stakeholders (the student body and the Libraries staff) in a collaborative manner.  The students suggested that they sought to use the space in a variety of ways so the project team allowed students to “test” furniture options and provide feedback, resulting in a variety of furniture installations.  To facilitate the use of various styles of technology, a low-profile raised flooring system was installed to allow distribution and access to power and data. This system brings outlets and technology to nearly every area within the library, while also permitting ease of future adaptation.

The design team’s solution for the space included removing all of the offices at the exterior walls, and to create collaborative staff suites at one corner of the space, bounded by textured, translucent storefront.  The open, flexible arrangement allows views to the exterior and for optimal visibility from the Information Desk which was positioned at the center of the floor and at the top of the grand stairway entrance.  Control gates are discretely tucked into slots at the ceiling to allow various parts of the floor to be shut down, and the bookstacks were custom designed with lockable sliding covers, and built-in seating and lighting.  A Café located at one end of the reading room offers self-serve espresso while carefully screening various vending machines.  Recycling and trash containers are positioned within built-in cabinets and custom-designed lounge tables contain electrical outlets for charging phones and laptops.  Wayfinding was handled through colored tile and lights.

Many project materials were selected for regional content and/or made-of high recycled content. PVC-free fabrics were used and some existing furniture pieces reupholstered/repurposed.  Motion sensors and LED fixtures were installed in key areas to reduce energy consumption.  Some existing elements of the historic 1960’s design (such as terrazzo patterns and ornamental ironwork) were maintained and complemented.

During the day, the space is awash with sunlight and filled with color.  You will notice the dramatic and edgy digitally-printed mural that spans the historic circular stairway, leading from the building’s lobby to the library, graphically telling the story of the School of Management and connecting users with alumnus who made the renovation possible.  While the space is impressive, perhaps the most convincing proof of its’ success is that the renovated library has more than doubled its user rate. 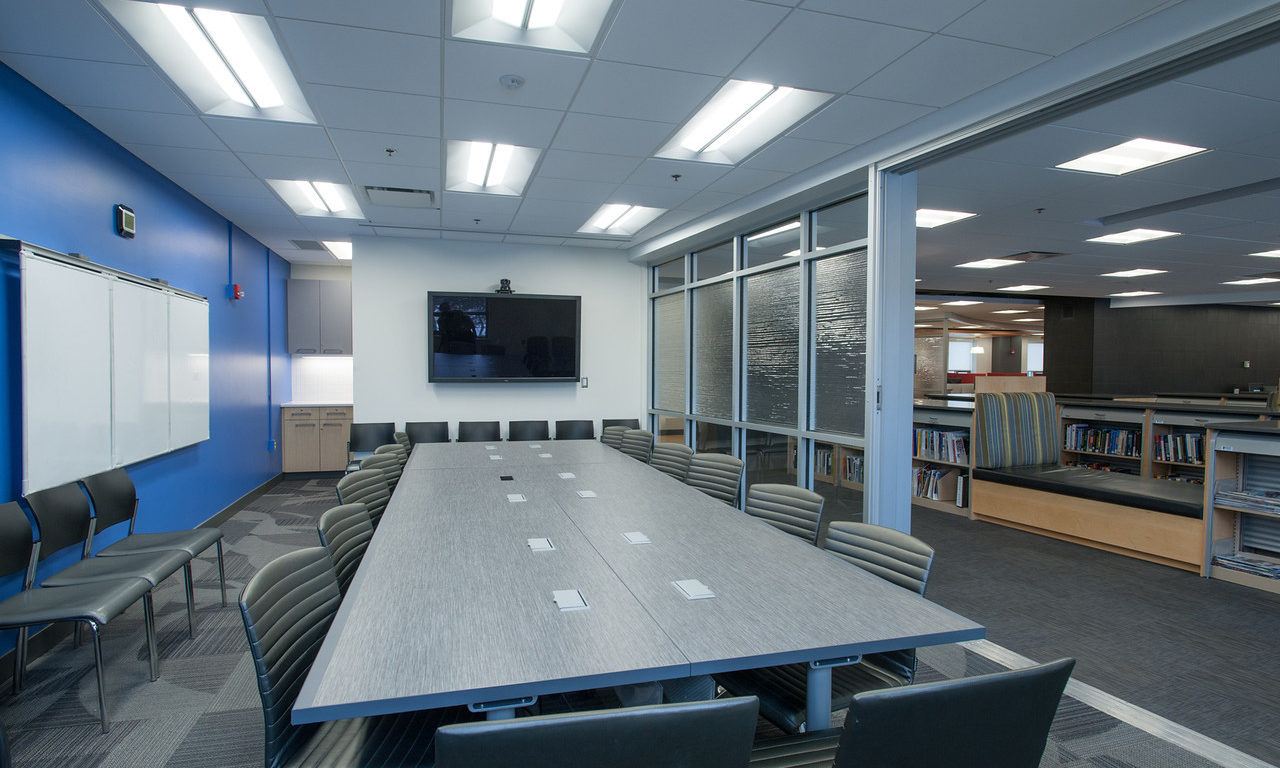 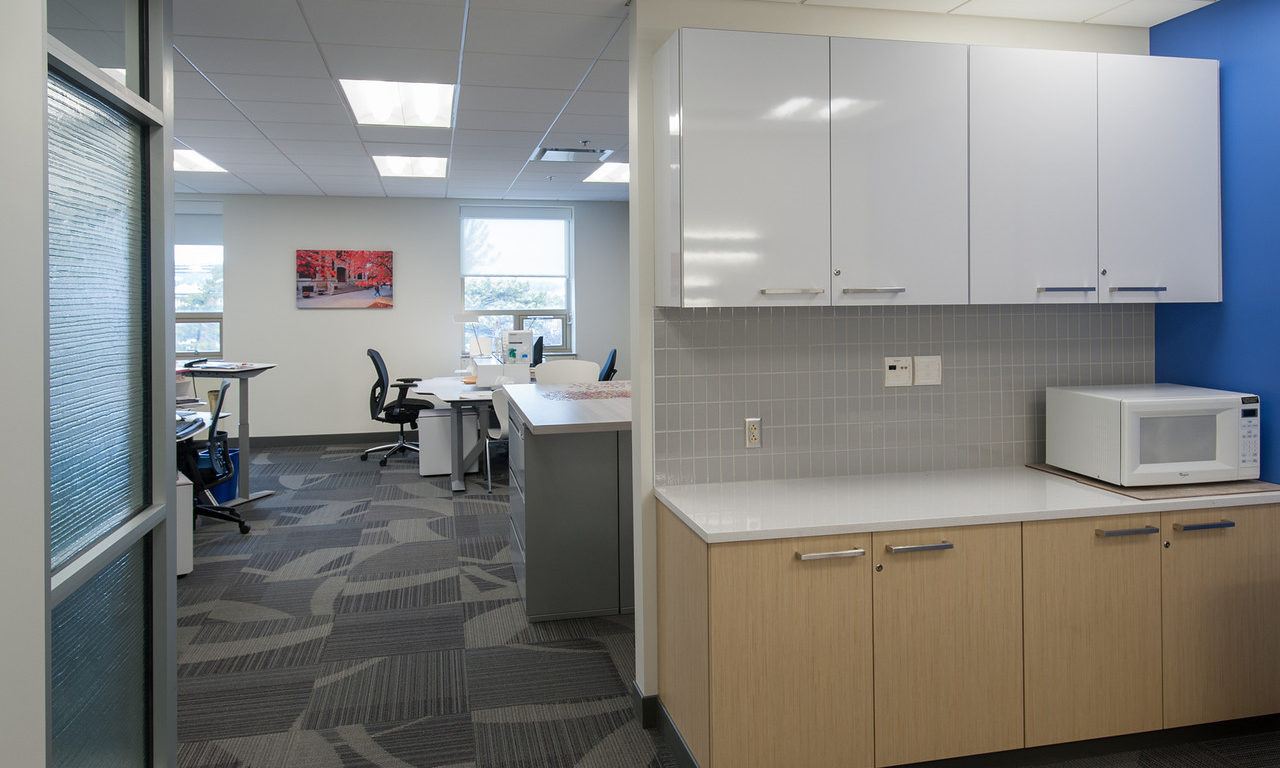 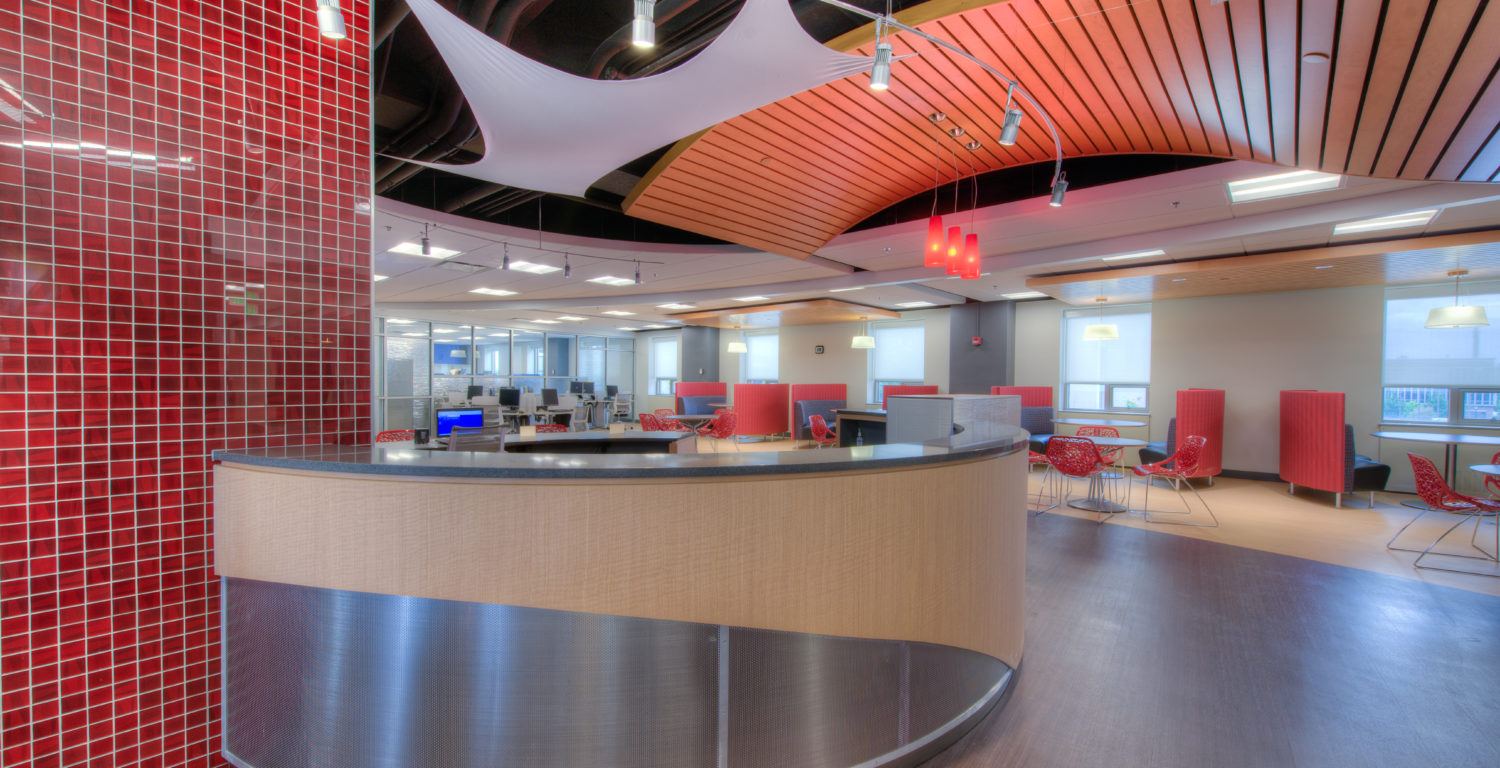 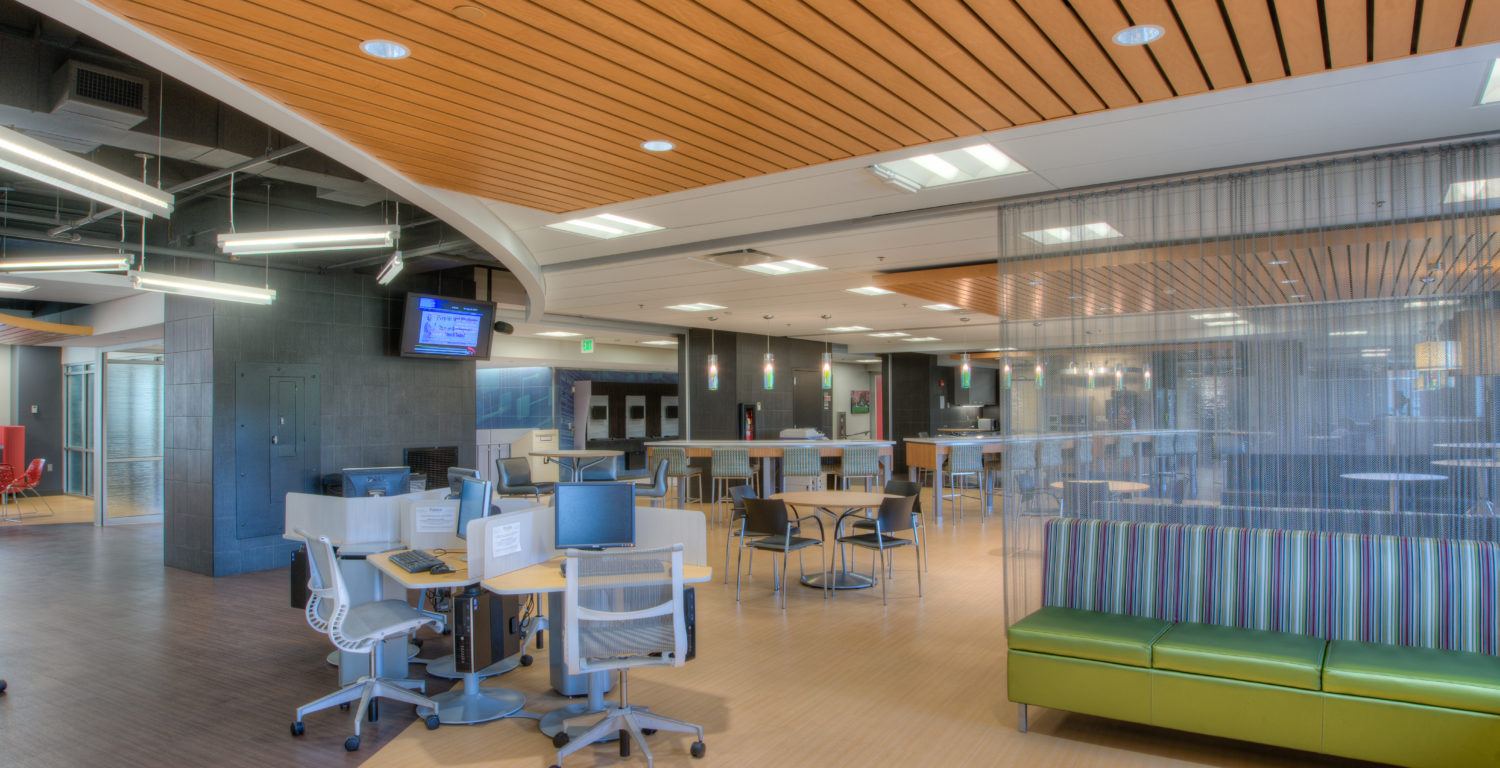 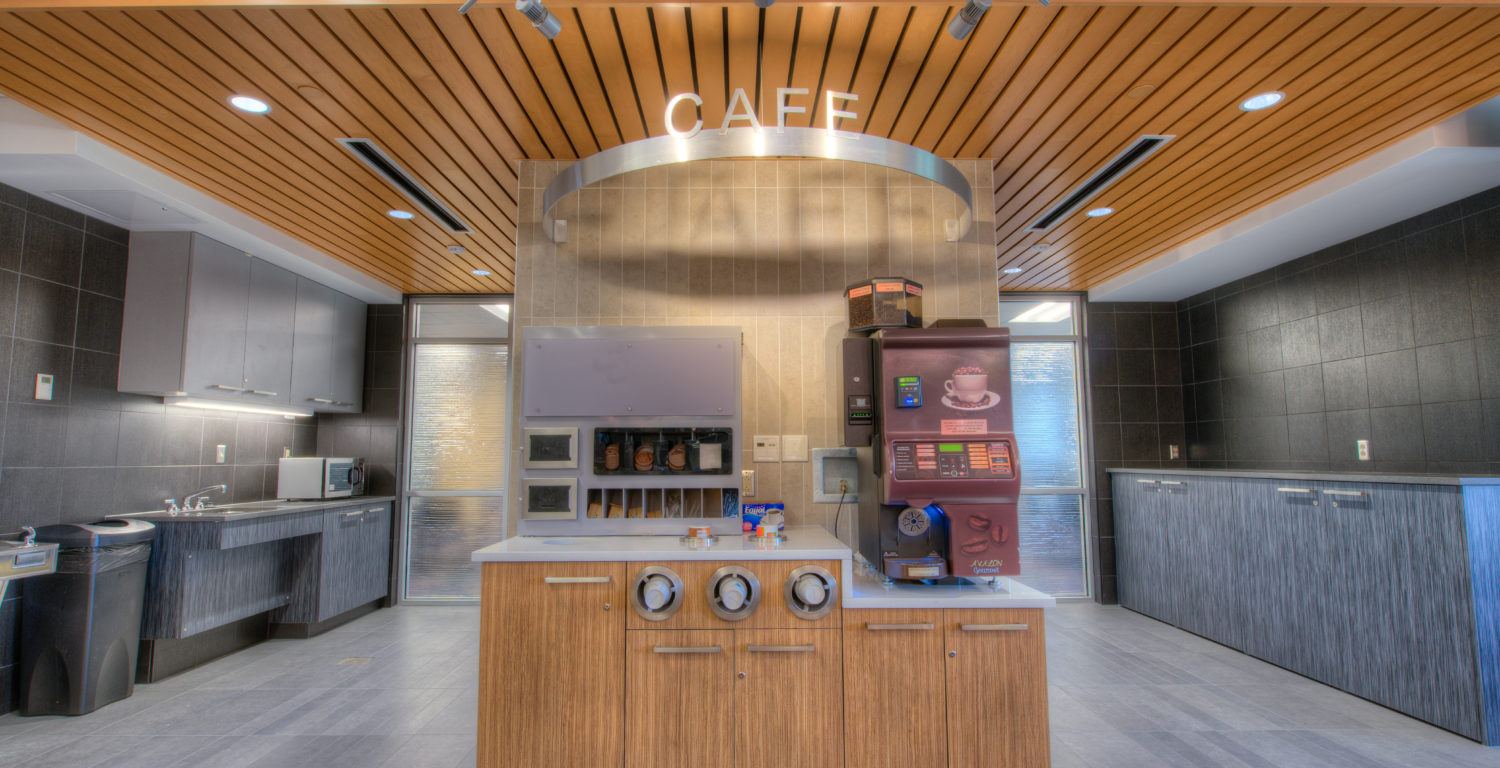 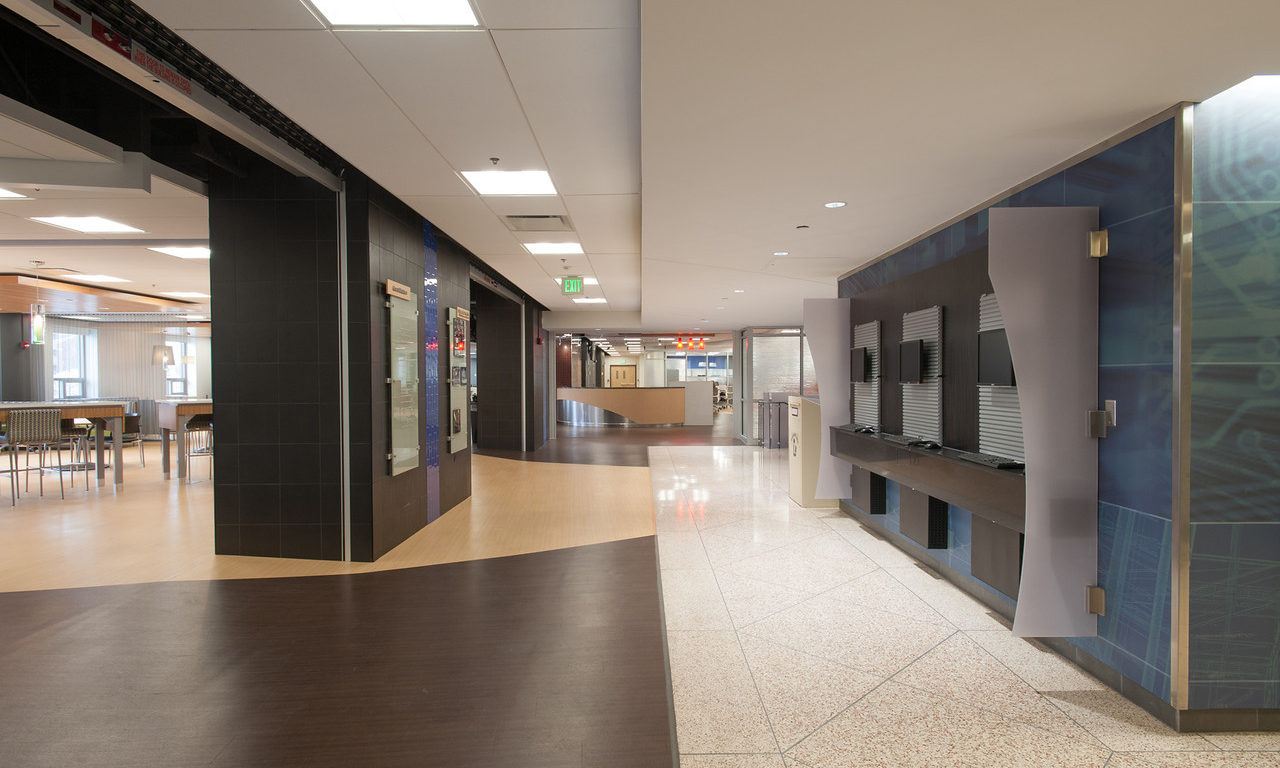 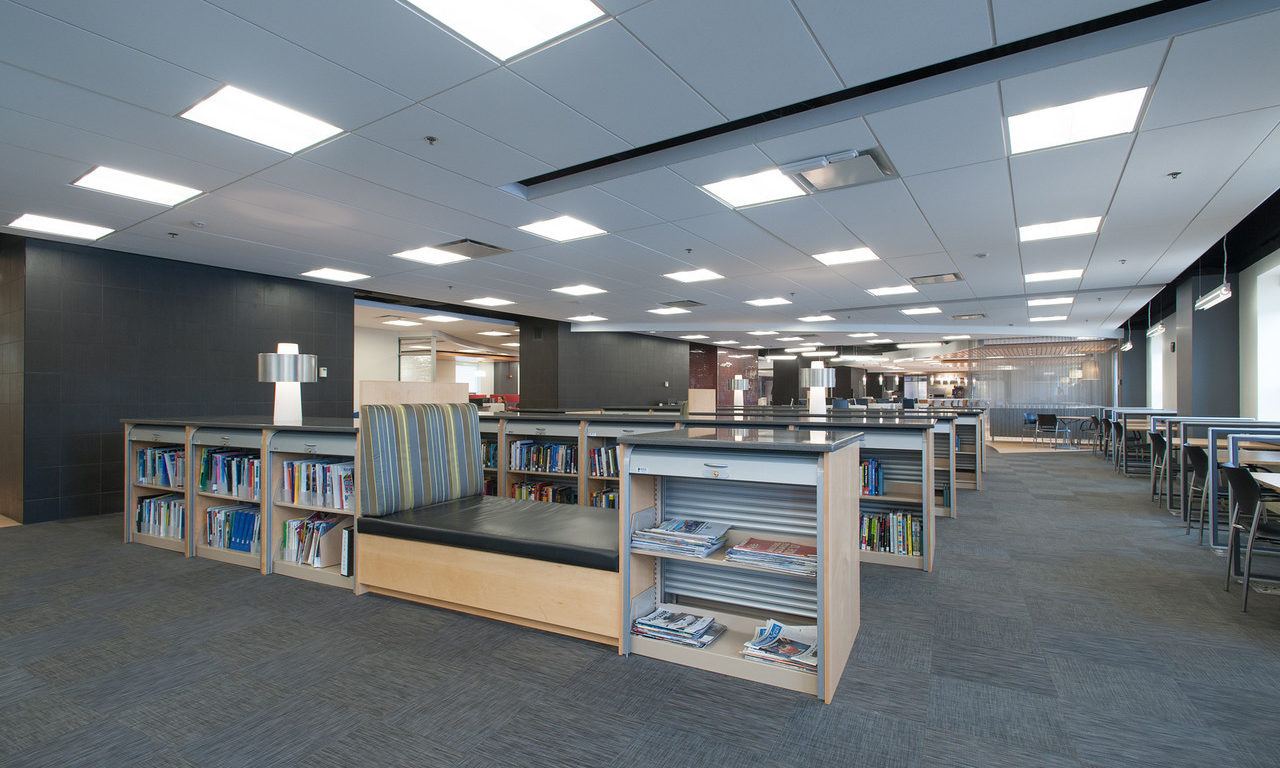 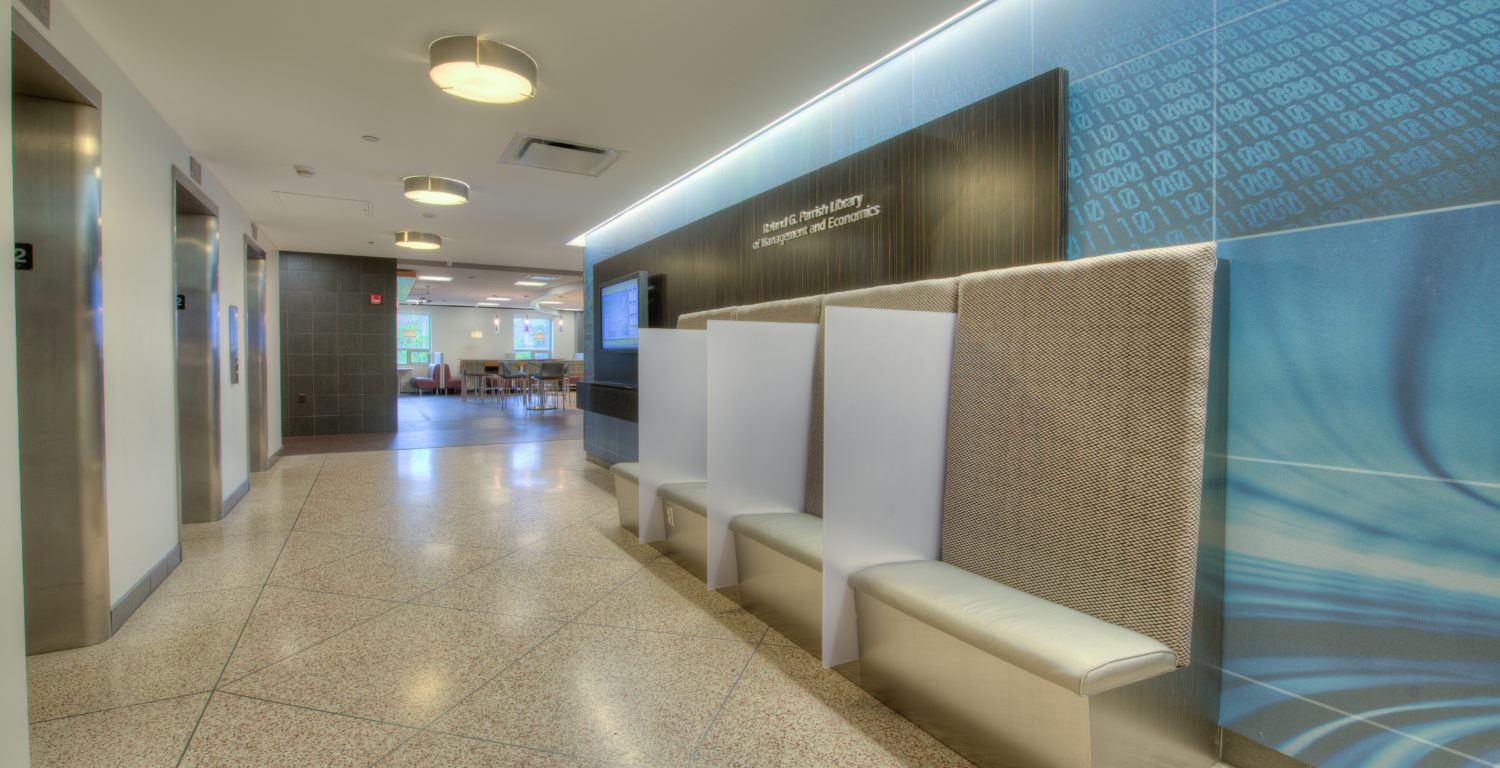 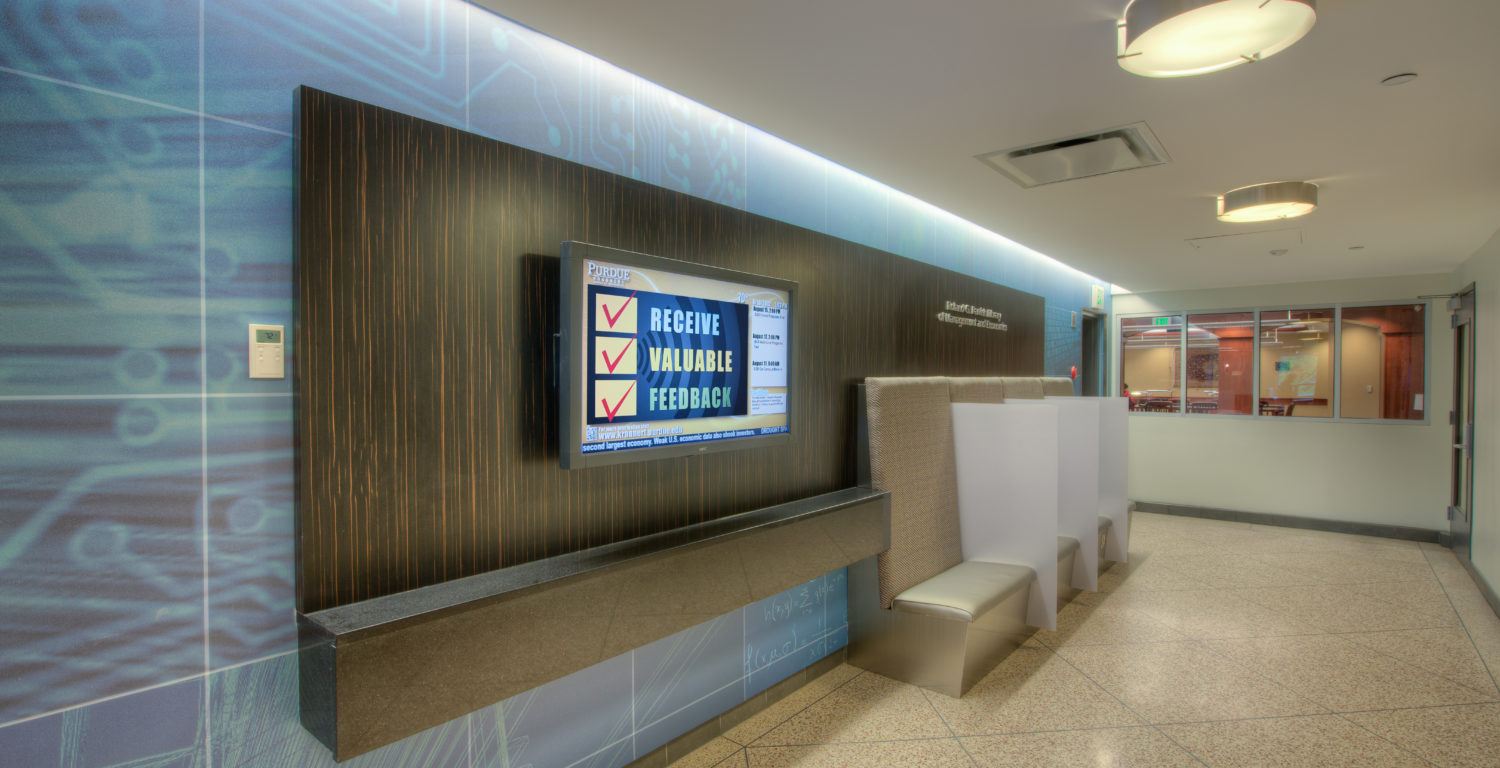 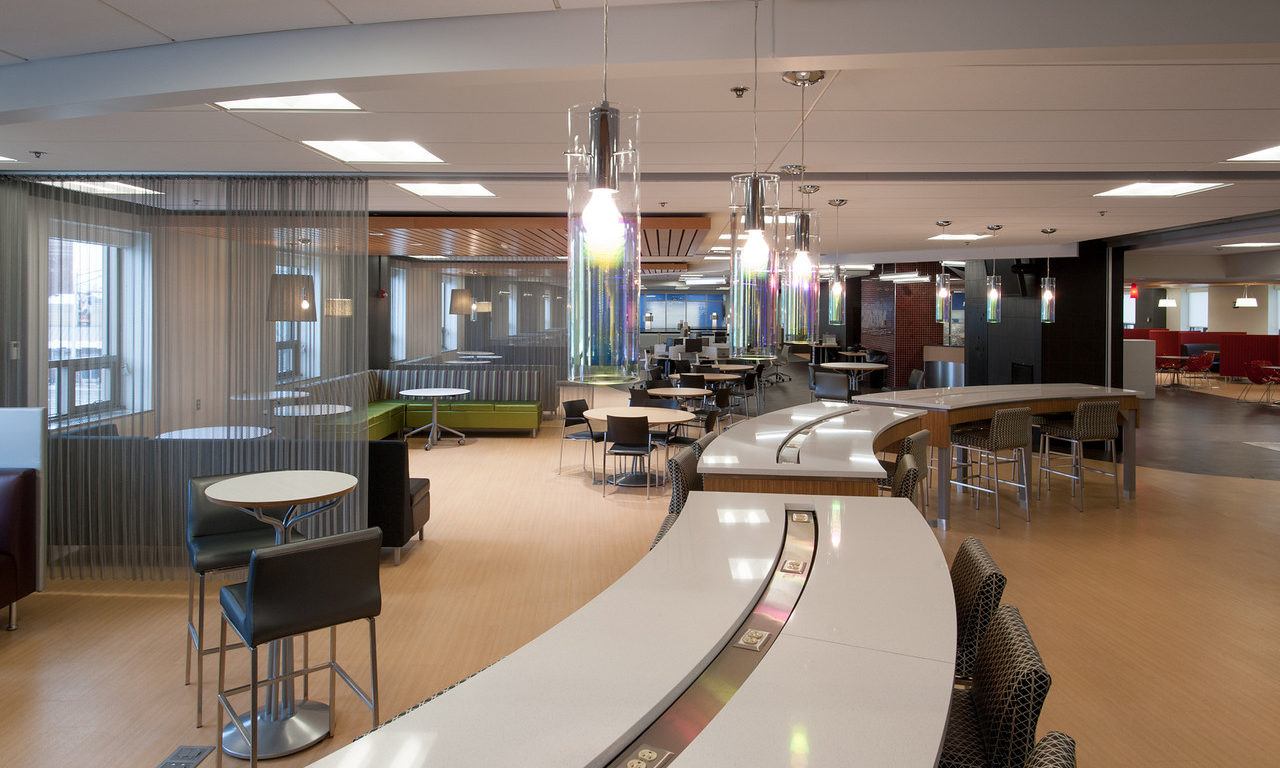 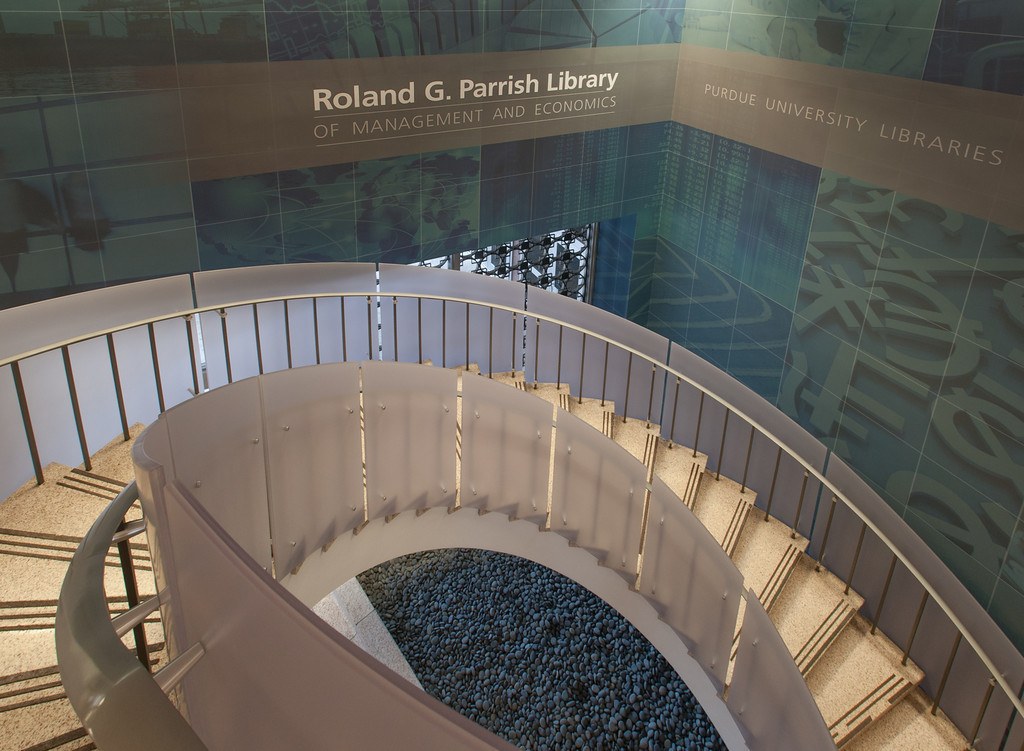 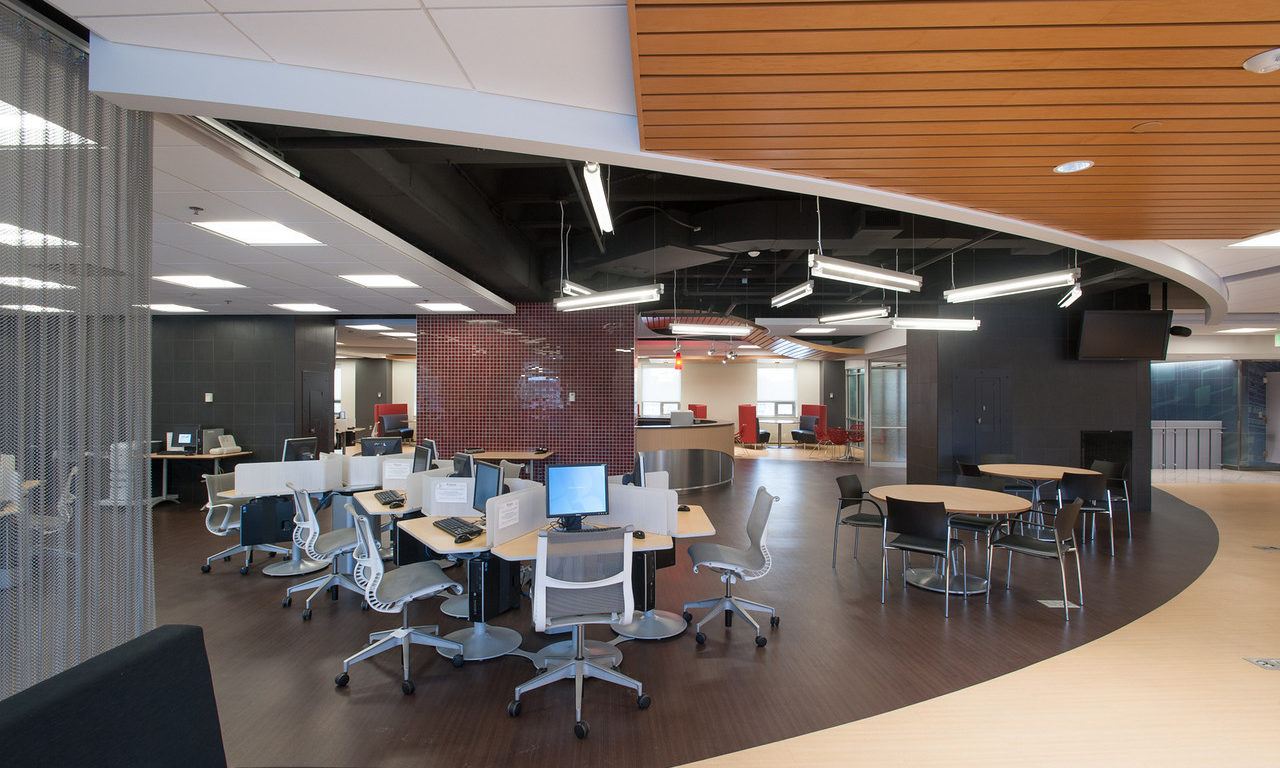 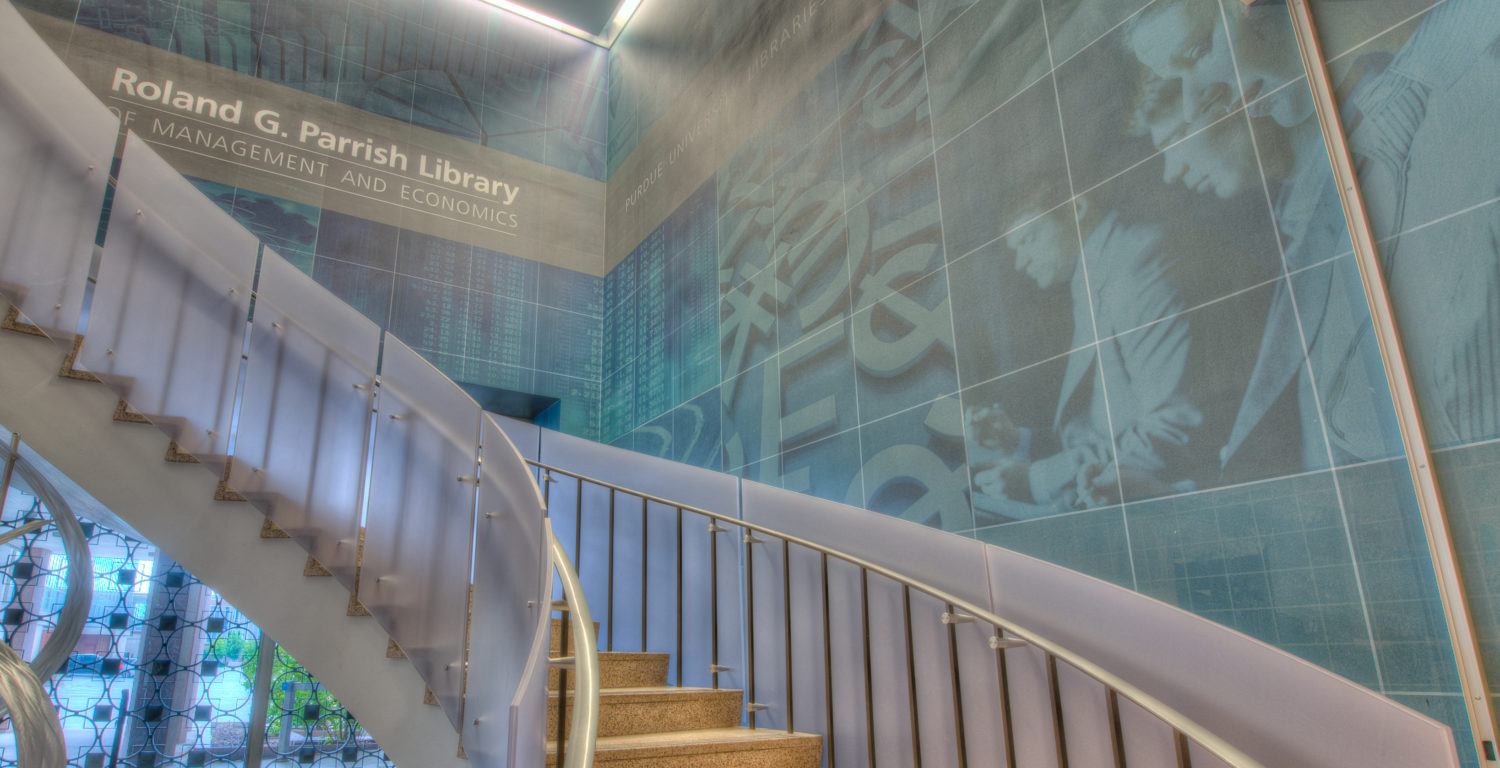 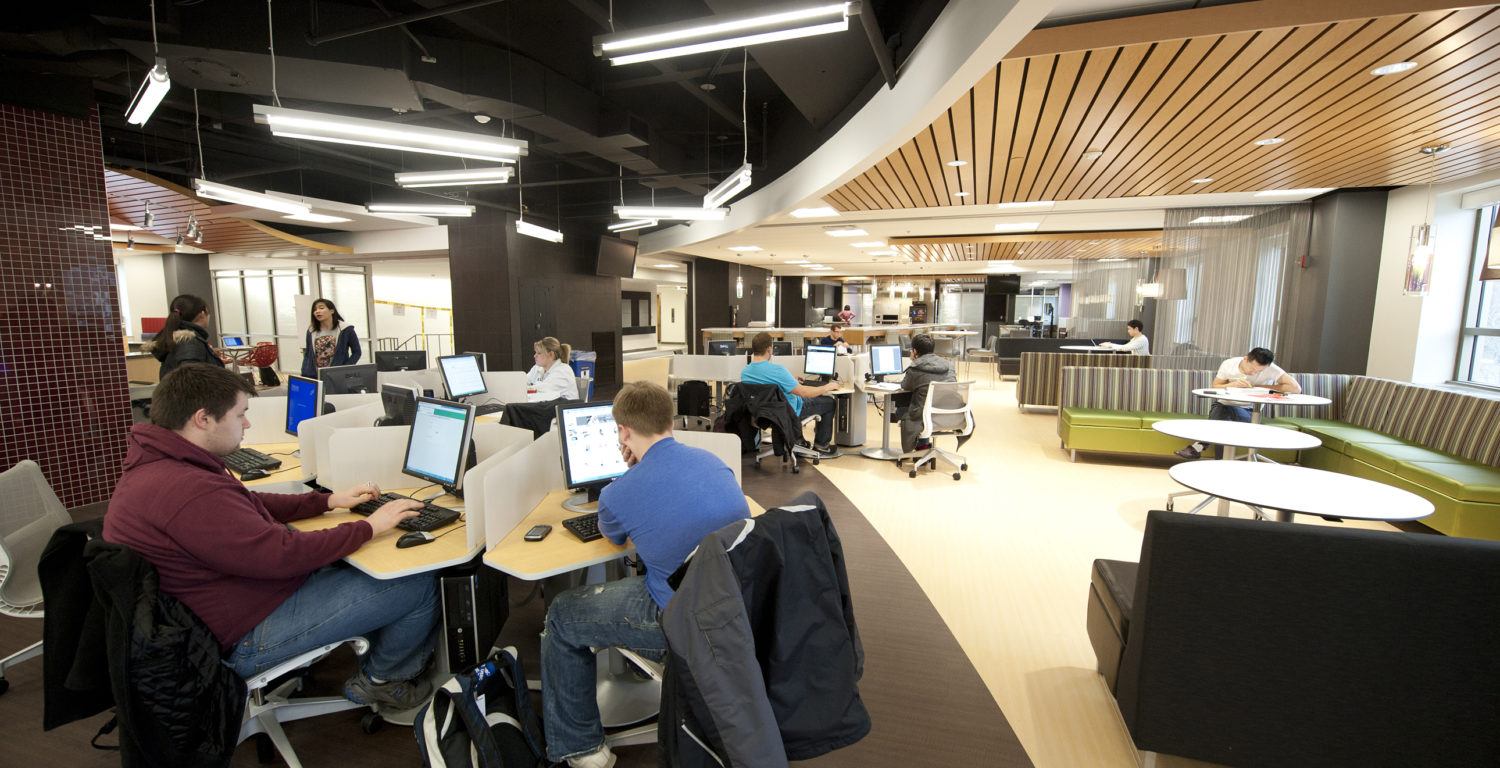